"What draws us into the desert is the search for something intimate in the remote." ~Edward Abbey

"Impacts of Early Automobiles and the Mojave Desert"
by Cane West

Before Joshua Tree National Park became a household name it was a favorite destination for adventurous desert motorists. Travel to Twentynine Palms helped accelerate the rise of the Southern California driving culture, and vehicle tourism into the Joshua tree forest developed years before the park was established.

Come explore how this century old driving culture created the park that we know today.

Cane West is a hybrid park ranger and historian. A seven-year veteran of the National Park Service, Mr. West interprets nature-focused parks from the perspective of human use and management through time. Cane West holds a doctorate in American Environmental History from the University of Southern Carolina.

Sponsored by the Desert Institute at Joshua Tree National Park and the Twentynine Palms Historical Society, this virtual lecture will be held on Friday, April 9 at 7 pm. The cost for the online presentation is $5.00 plus a $1.24 online processing fee.

To register for this virtual evening program, please browse to crowdcast.io/e/impacts-of-early.


Starting on Wednesday March 17th our Museum and Gift Shop will be open
Wednesday - Sunday 1:00-4:00 PM

While we were shut down we made major renovations to our exhibits. Be sure to stop by and check it out.


Now available in our gift shop 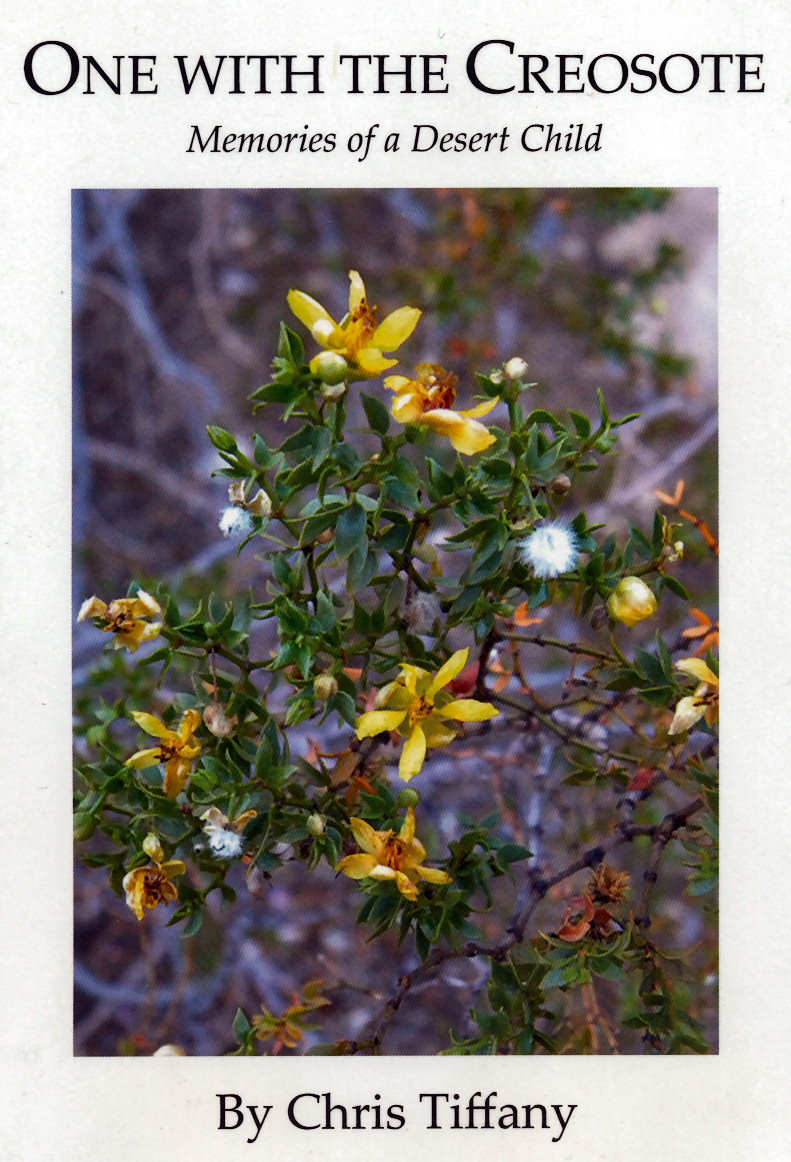 One With The Creosote – Memories of a Desert Child

With a blending of poetic imagery and journalistic prose, writer Chris Tiffany reflects on her childhood growing up on the Mojave Desert during the '50s and '60s, to reveal the origins of an interwoven connection to the natural world around her and its influence on her life's paths and perspectives.

Tiffany, a Santa Ynez Valley resident who grew up in Twentynine Palms, is daughter of the late Joe and Margot Spangenberg, who moved their family from San Pedro, California, to Twentynine Palms in 1953. The Oasis of Mara, at the northern entrance to Joshua Tree National Park, was her childhood playground.

Since age 10, Tiffany has kept personal diaries and journals, and credits her writing talent to her mother, who worked as a reporter for The Desert Trail for many years.

A graduate of the University of California, Irvine, Tiffany is a former director of the Santa Ynez Valley Family School, whose curriculum encourages exploration of the surrounding Los Padres National Forest as an extension of the classroom.

A 40-year resident of the Santa Ynez Valley, she is a past editor of the Women's Environmental Watch newsletter, and served as the initial publicist and program coordinator for Arts Outreach for many years.

She continues to enjoy frequent retreats to her cabin on the boundary of Joshua Tree National Park.

The Twentynine Palms Historical Society is pleased to announce its 2020 Old Timer of the Year honoree, Jerri Hagman.

Jerri Hagman arrived with her younger twin sisters and parents Leslie and Corma Harness in 1959 from Oregon due to Leslie's health. Leslie found work with maintenance on the Base and Corma became the cook at Dean's Coffeehouse near Four Corners. During her teenage years Jerri worked for Charley and Helen Matherly at Dean's. Jerri was a loyal and hardworking young girl, with a contagious warmth and good nature. Charley and Helen were so fond of Jerri, they considered her family.

Jerri was graduated from Twentynine Palms High School in 1963. In 1965 she married Paul Hagman, a local Marine shortly before he was sent to Vietnam. Paul remained in the USMC and he and Jerri were stationed around the world with stints here in 29 Palms. Paul retired as an E-9 and they made their home in Apple Valley and 29 Palms.

Charley Matherly passed away in 1978 and left his homestead and business properties to Jerri. Many of those business properties were located in the Historic Plaza, including the Original 29 Palms Garage. She and Paul restored and expanded the Matherly homestead to become the Homestead Inn Bed and Breakfast. Jerri hired her older sister Judy Harness to be the manager and opened in1991. Their grand opening was a special Christmas Tour for the 29 Palms Historical Society. The Homestead Inn was host to numerous community and private dinners, celebrations and fundraising events. In 2005 Jerri converted it to an extended stay format that is still in operation. She has devoted decades to promoting the City of 29 Palms and tourism through many local and state associations.

Jerri was a primary force in creating the incredibly successful Sky's the Limit Observatory and Nature Center. She supported creating the City of 29 Palms Night Sky Ordinance. She served on the Sky's the Limit board for many years. She was an early member of the 29 Palms Historical Society and served on its board of directors. Jerri has been a Soroptimist and served on the board for Basin Wide Foundation. She was also a driving force in bringing the first Certified Farmers Market to 29 Palms.

Recently, Jerri donated a large Gilmore Oil Red Lion Gasoline tank to the Historical Society. The tank was used to provide fuel to the kiln at the block making plant in the Historic Plaza.

The "Old Timer of the Year" program was created to honor early or long-time residents who contributed significantly to the development or betterment of the Twentynine Palms' community. The program is intended to honor "everyday heroes" whose contributions and efforts over the years have largely gone unsung.

Now that the museum is open be sure to see our newest impermanent exhibit
featuring the art of recently deceased local artist Noble Richardson. 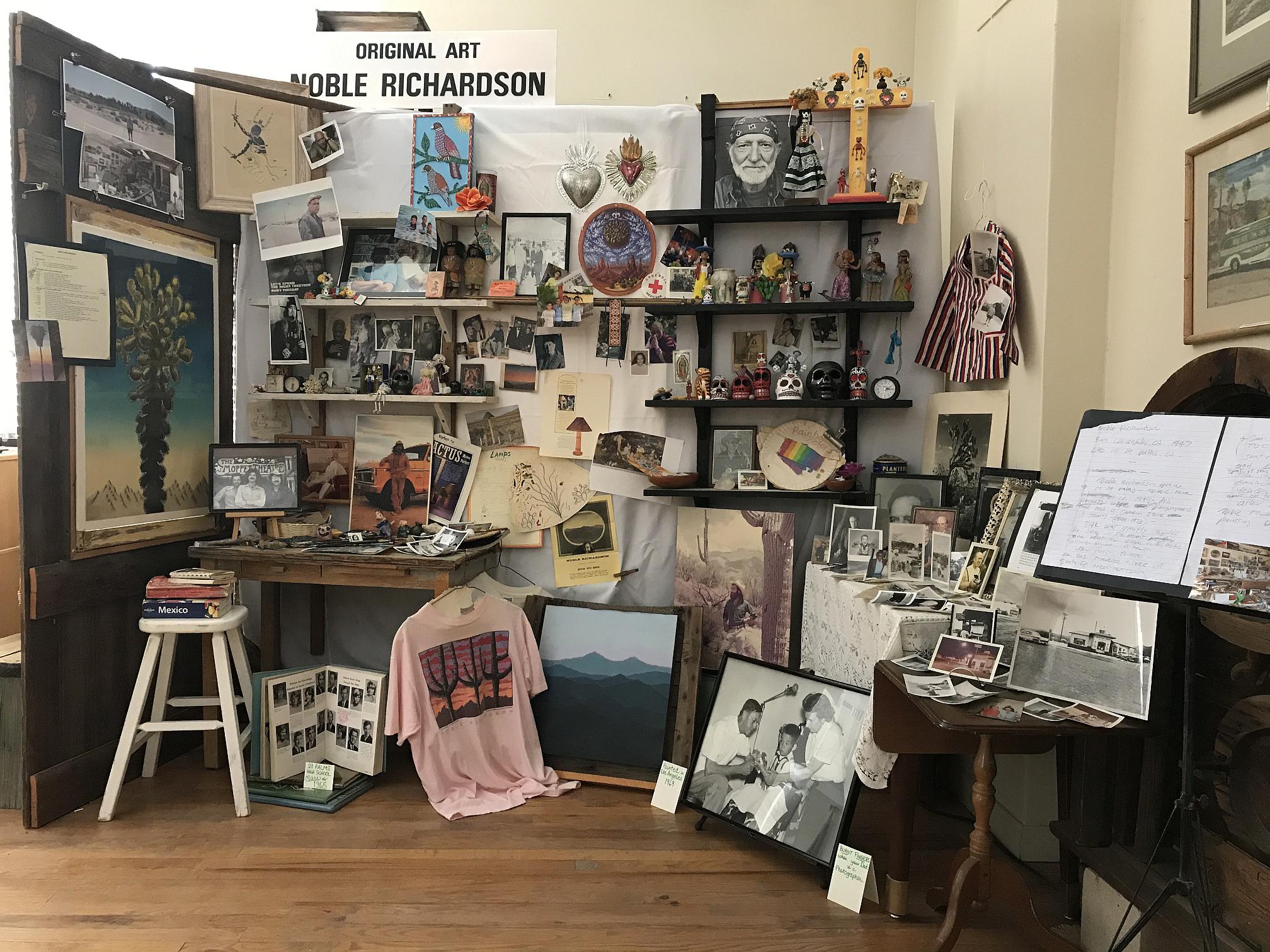