Your Accessions Committee has been busier than ever as our community and families of the people who once lived here have been giving us their history and their treasures. Some have verged on incredible. There are so many items I did not have time to archive them all prior to your editor's deadline.

The Friday night lectures are usually not mentioned here, but our last lecture featured historian, desert researcher, and author Joe de Kehoe talking about the desert area by Amboy and a very small portion of Route 66. For those who would like to pursue more information, please be aware that Mr. de Kehoe has generously donated his transcripts and oral recordings from there. They are available for research along with our other files and archival materials. Our Accessions Committee meets every Wednesday morning from 9:00 a.m. to 12:00 p.m.

For those that live further away, you are able to contact us through our website. The information on how to obtain research assistance is there. Requests by e-mail and regular mail are restricted to one or two specific areas. A $20.00 donation is required by the e-mail and regular mail requests. Plus, if you want to know what is happening or view the latest and oldest photographs visit: https://www.29palmshistorical.com/

Thanks for your generosity. Two of the donated items still waiting to be accessed are fabulous finds. They will appear in the Accessions column next issue. Until then look in the Native American display. 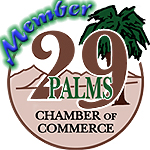