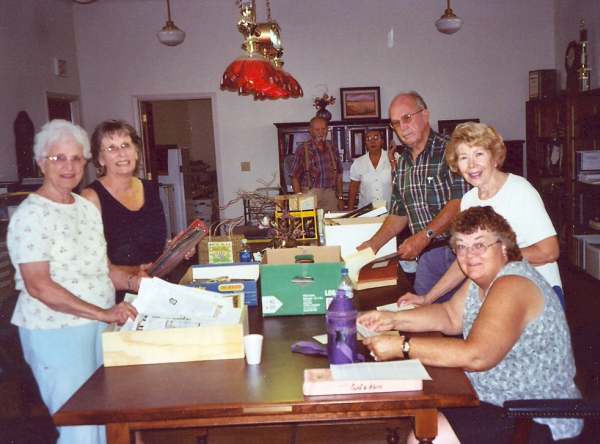 Summer has been a bit brutal, but it is about to end. Then our busy fall season starts. There have been so many changes at the Old Schoolhouse, I am not going to list them, just drop by and take a look.

Our task force changed during the summer. I have had a wonderful helper, Julia Sizek. Without her I may not have been able to go through all the donations we received. Rosalie Mendoza has a job for life scanning the old negatives. Sandy Rogers has found employment that pays. Joni Franklin is imputing the data that Sandy was handling. I think that means her job has doubled. Pat Rimmington and John Steiner are researching. Dana Bowden has created a new exhibit for the main room. We hope you have seen the Tribute to the Women in the Marines in the main exhibition room. Another exhibit is planned for October.

Jim Krushat keeps the Membership up to date and works on a military exhibit to be. Cheryl Erickson has added the library donations to her to do list. Nolan has all the Treasurer duties. Les Snodgrass has been working like a madman for the construction of our Expansion addition. It is looking good out there.

All researchers studying the history of Twentynine Palms or the Morongo Basin history are welcome to visit us on Wednesday mornings from 9:00 a.m. to 12:00 noon as we are always at the Old Schoolhouse Museum Library on that day. For those that live farther away, you are able to contact us through our website. The information on how to obtain research assistance is there. Requests by e-mail and regular mail are restricted to one or two specific area requests. A $20.00 donation is required by the e-mail and regular mail requests. If you want to know what is happening at the Old Schoolhouse Museum or view the latest and oldest photographs visit: http://29palmshistorical.com.

Please be aware that the different ways I type in information with or without capital letters means that I am copying it from the way it was spelled or written on the item. Dates and addresses are something that people who setting up the titles or recording the information used different styles.

We are truly grateful to all who donated. Your generosity allows us to save the history of our community for future generations.